During the Sengoku Period, Sanada was thought to have worn a full set of red round body type armor. We have used real iron, Japanese lacquer, leather and other genuine materials to recreate Sanada's armor in 1/4 scale size.

In researching the actual armor worn by Sanada, we found there was little reliable historical information left from the era, so instead we examined the armor that was worn by the generals from the Takeda Family, to which Sanada belonged. Based on that, we are able to complete this realistic and representative piece of workmanship. 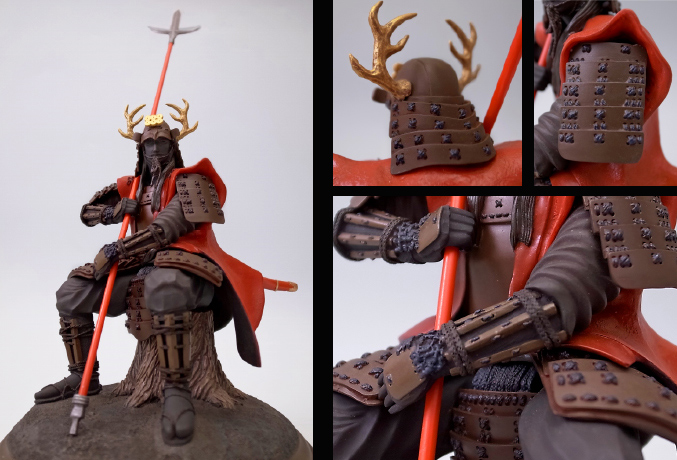 After conducting extensive research on the Sengoku Period, Kensin Co., LTD is proud to present this statue of Yukimura Sanada.
This original pose is our interpretation of how he expressed his last moments of life. 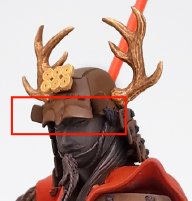 The helmet is molded to match the shape of the human head, and the
visor is specially formed to follow the contour of the eyebrow.
In fact, it takes skills of the very highest standard to make the eyebrow
shaped visor, and we have used many references from the helmets of
other Takeda & Sanada clan warriors in crafting our product.
The popular warriors helmets from the Sengoku Period features attachments
showing exaggerated ornamentation and are custom shaped to the warriors'
heads as can been seen with the helmets of Tokugawa Leyasu, Ii Noamasa,
Tachibana Muneshige and Sen no Rikyu. 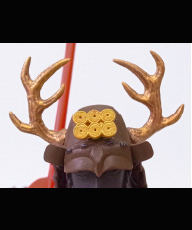 Deer Horn and the Rokumonsen Crest 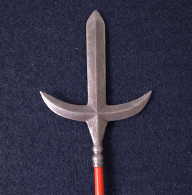