Home > BERSERK > Sold Out Items > No. 417 Guts -The Spinning Cannon Slice 2016- 1/6 Scale Limited Edition I *Bloody Splatter Version*Sold Out!!
Please read all the details below before you send inquiries for this item.
We strongly require every customer to confirm the Shopping Guide before order/pre-order from this site. 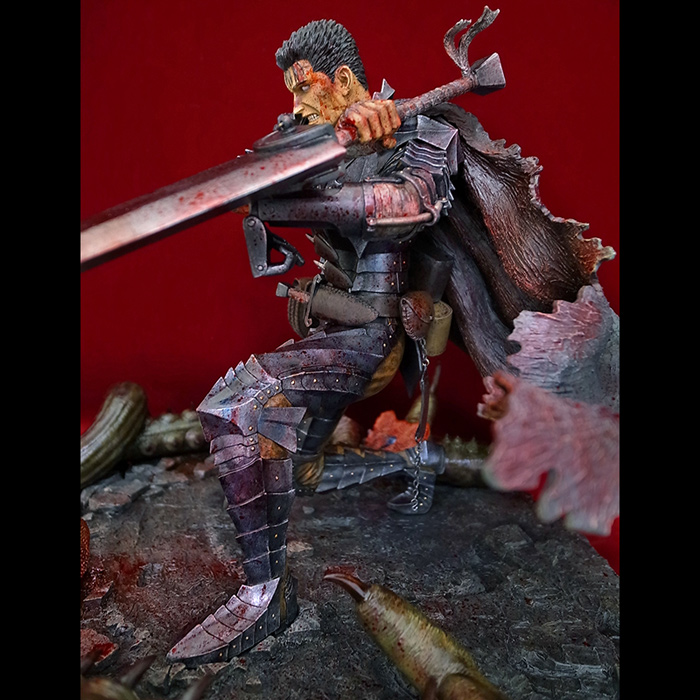 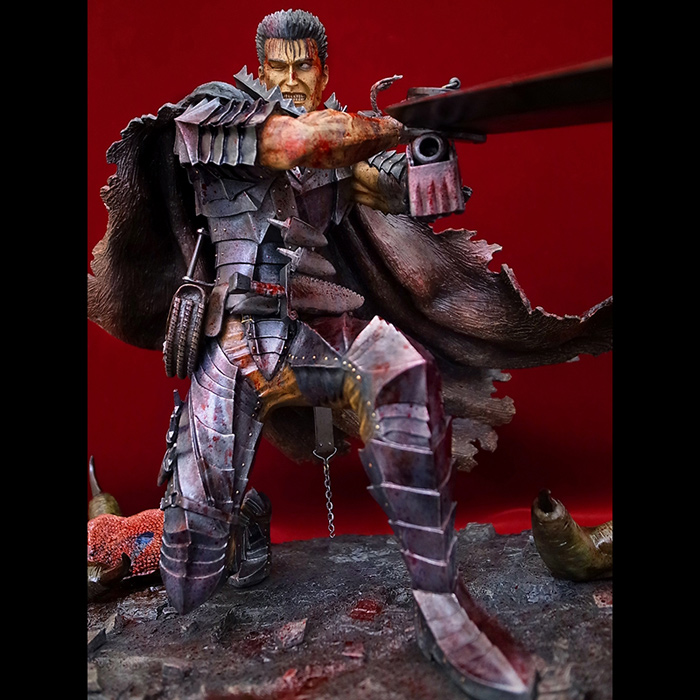 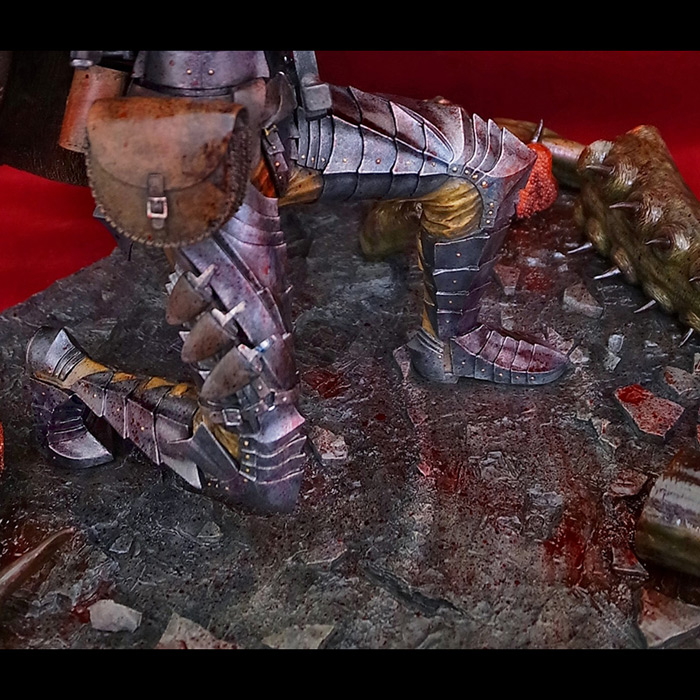 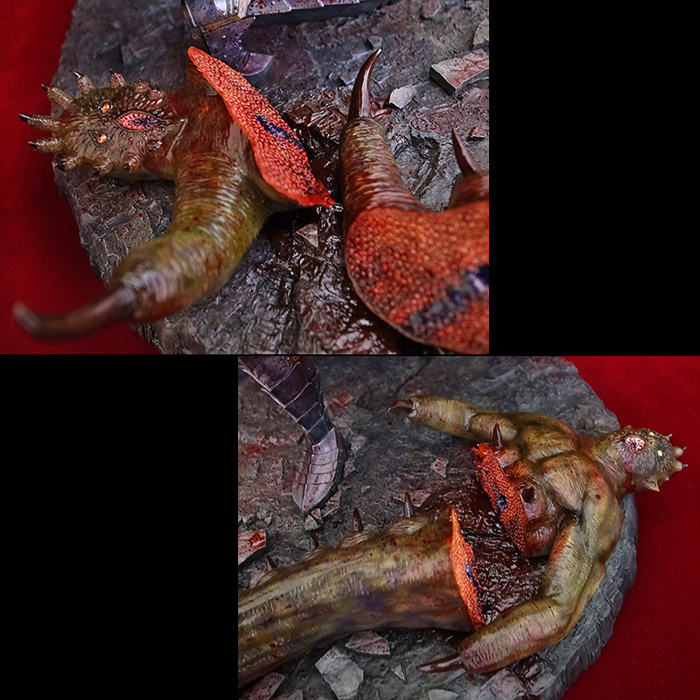 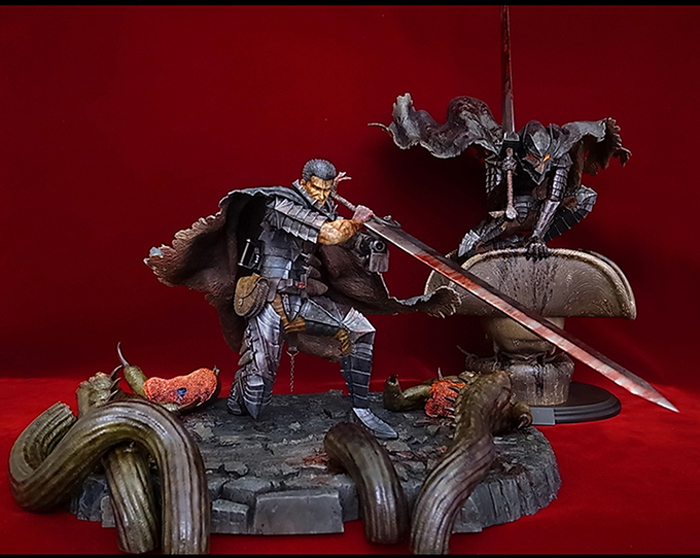 *We suggest our customers to purchase this release together with the berserk:tentacle ship and enjpy the world of berserk.
*You are able to compare the base size and volume between two different item.

A Big Scale Tentacles Battle Diorama base (Width of 42 cm & Depth of 36 cm) with Guts armor released for the first time!

We bring the real feeling of manga in form of this product.


To commemorate the launch of Berserk Anime on July, we have released the large scale tentacles battle diorama base- Last 1 pcs

This version has more blood in many parts of the item than No. 418.

In 2014, based on the requests after the launch of the item “Guts-the Spinning Cannon Slice”,we decided to remodel its armor with unique and large scale diorama base.

You are able to check the sharpness and volume in the armor of Guts.The color of the armor, eye and the mantle is completely changed than the previous version.

There is attachment of a large scale tentacle base with the two tentacles fully wounded in the base part.

This statue is from the battle scene in Berserk volume 35, Fantasia Arc, Elf Island Chapter. Guts is wearing the Berserk armor, and squatting on the bow of the Tentacle Ship. he stereoscopic bow makes this statue more powerful. The Berserk armor show that Guts has already lost his self-control. The framework of the hands of the tentacles extending like a magic looks dynamic in the base of Guts. It is the series of “Cannon Slice” where you are fully able to enjoy the reproduce work. The overwhelming volume of the tentacles and the guts itself can be felt in this product. The fresh blood is flowing from the tentacles feels the realism in the battle. You will be fascinated more by the movement of the cannon slice of Guts.
The bloody splatter version has addition of splatter painting in the mantle part, the base part and in the armor of Guts. You are able to check the difference of painting.

In the base part, the two bodies of the tentacles monsters is produced thoroughly. All the modeling of the parts such as the detail like eyes and mouth are done properly bringing the real feeling in the battle. From the open wound, there is a liquid flow of the vividly ominous blood bringing the image of the overwhelming movement of the Spinning cannon Slice. Literally, looking from 360 degree and from all sides, you will be impressed with this art work.

Based on the customers’ requests on the questionnaires about the modeling of the item, we try to reproduce the armor of Guts bringing the image of powerfulness. In comparison to the previous version, the thickness and sharpness of the armor can be seen clearly from the image of Guts. Please pay attention to the volume of Guts. Furthermore, there is a complete change in the whole armor, mantle and the color of Guts armor. With the addition of the huge and unique diorama base, we present a complete modeling of the item.

Berserk (The Tentacle Ship) (Product Number: No. 336 & No.335), in Volume 35, it is a continuous scene after “Guts-The Spinning Cannon Slice”. Therefore, we like to recommend purchasing this new release to those customers who has already purchased “Berserk-The Tentacle Ship”. You are able to fully enjoy the scene of Volume 35 by collecting this favuluos statues.

*If you wish to pay the item in an installment basis. Please kindly write in "remarks" as Installment plan A or B during your purchase, otherwise we are unable to send the correct invoice.

Guts 1/6 Scale -The Spinning Cannon Slice 2016- Limited version 1*Bloody Splatter Version
Unit price: 140,000JPY (approx. $1306/ €1,145)
Size: approx.1/6 scale- Ｗ42×Ｄ36×Ｈ27（cm）*This size is the prototype size of the product. The final product be a slight difference in the difference in the item. Please kindly understand about this.
Attachment: serial number nameplate, the two tentacles in the base part.
Material: Polystone, some parts has special polystone, etc.
Released Date: May 12th, 2016.
Created & Manufactured by ART OF WAR
Estimate delivery date: around beginning of August, 2016

3. Every piece of our item is hand painted. The exact product may have differences to the sample pictures. The pictures are only image.